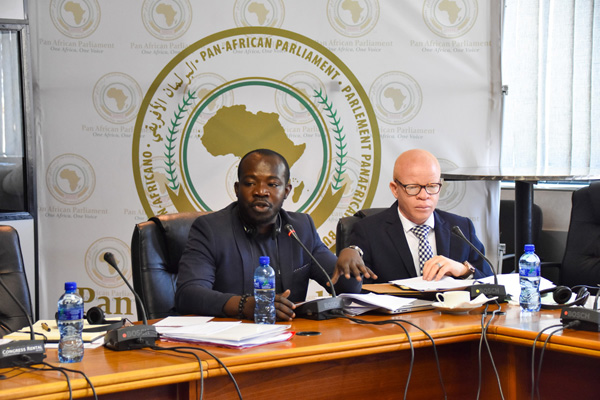 On 7 August 2019 the Disability Rights Unit of the Centre for Human Rights and the Office of the United Nations Independent Expert on the enjoyment of human rights by persons with albinism, Ms. Ikponwosa Ero, briefed members of the Committee on Justice and Human Rights and the Committee on Gender, Family, Youths and Persons with Disabilities of the Pan-African Parliament (PAP) on the annotated outline for the Draft guidelines on ending harmful practices related to manifestations of certain beliefs in witchcraft. In May 2019, the Committee on Justice and Human Rights and the Rules Committee of PAP adopted a resolution authorizing the drafting of the guidelines. The purpose of the briefing was therefore to elicit the input from the committee members on areas of concern or issues from specific countries or regions to be taken into consideration in the drafting of the guidelines.

The draft annotated outline of the guidelines was presented by Mr. Michael Nyarko who highlighted that belief in witchcraft is quite widespread in Africa with polls showing that about 55% of Africans believe in witchcraft. While ‘beliefs and practices related to witchcraft vary considerably between different countries and even within ethnicities in the same country’ the impact of beliefs in witchcraft is manifested in two main ways. First, in the ‘ability to harm someone using mythical power’ and second, the ability to, through certain mythical powers, enhance the fortunes of a practitioner or believer. Both manifestations have the potential and have indeed led to gross human rights violations across the continent.

In the first instance, belief in the harmful impact of witchcraft leads to witchcraft accusations which are usually followed by violence, social rejection and or discrimination against those who are believed to be or who identify themselves as witches, sometimes leading to death, disability, injury or the ostracizing of the accused. In many of these cases, elderly women and in recent times children with disability are the most affected by such beliefs. In some countries, persons accused of practicing witchcraft face criminal sanctions from the state, leading to their imprisonment.

In the second instance, belief in the ability of witchcraft to increase one’s fortunes has usually led to ritual killings and other forms of violent attacks aimed at procuring body parts of designated groups of people for ritual purposes. These cases also extend to ritual rape and grave desecration for the purpose of stealing and trafficking remains of targeted persons. For instance, persons with albinism have been attacked in many parts of Africa under the belief that certain body parts of a person with albinism can be used through witchcraft rituals or traditional medicine to ‘induce various benefits, commonly wealth, good luck and political success’. For these reasons, more than 700 attacks against persons with albinism and related to witchcraft beliefs have been reported in 27 African countries.

These phenomena represent competing human rights between the fundamental right to freedom of thought and belief (religion) of practitioners of so-called “witchcraft” and the fundamental right to life, right to bodily integrity, freedom from torture, cruel, inhuman or degrading treatment or punishment and the right to non-discrimination of victims of these harmful practices and their family members.

While international human rights law and national jurisdictions have limit manifestation of belief in context of public safety and the protection of the human rights of others, there is limited guidance within the African human rights system on how to balance these rights in this context. Moreover, given that the region has a significant number of believers in witchcraft, a significant number of victims of harmful practices in this context, the ubiquitous presence of “traditional healers” who are often indistinguishable from practitioners of “witchcraft”, it is therefore imperative that some guidance be provided on what measures African states could and should take to protect the human rights of all persons who are vulnerable to these harmful practices, while respecting the right to religion and culture.

The guidelines will provide a comprehensive, yet succinct identification of the human rights issues implicated by harmful practices related to manifestation of witchcraft. In so doing, it will identify the competing rights at stake and how these could be reconciled with a human rights perspective. Finally, it will make recommendations on measures to take. It will cover:

Members of parliament shared their concerns on these harmful practices, engaged on the issues and provided feedback on how issues related to the harmful manifestation of witchcraft believes are treated in their jurisdictions urging the presenter to take those initiatives into accounted when drafting the guidelines. Some members present also expressed that care needs to be taking in ensuring that all forms of African spirituality are not demonized and that the guidelines should be clear that it is only harmful practices that are prohibited and not necessarily forms of believes that are not considered mainstream religions (‘witchcraft’).